The La Porte County Historical Society was organized January 30, 1906.  The realization of a need for this organization came about with an awakening of interest in La Porte County history following the publication of the monumental work by Rev. E. D. Daniels’ published history of the county.  The Supt. of Schools expressed the value of such a society and the work it would do to gather and preserve materials about the county’s history.

The first Museum was located on the upper floor of La Porte’s first library at 805 Maple Avenue.

On October 27, 1921, papers incorporating the La Porte County Historical Society were filed.  The object of incorporation was literary and scientific with the collection of county relics in view.  One of the first acts of the new Society was to secure the relics left by the late W. A. Jones, consisting largely of rare firearms secured by this La Portean while traveling throughout the world.  In his will was a bequest to the City of La Porte of his famous collection of firearms and antiques.  The bequest, however, was made on the condition that the City prepare a suitable room in the Carnegie Library building in La Porte for the housing of the antiques and the proper care for them.  The Historical Society became the caretaker of this collection in an area provided the Society for its Museum in the basement of the Carnegie Library.

With the growth of its collection and a need for more space, the Society was offered an area in the basement of the La Porte County Court House.  This officially opened April 3, 1938.  Although this space was “well lighted and ventilated and the hundreds of historical items in the museum were shown to best advantage,” the Society’s collections continued to grow and space again was at a premium.  Residents from all parts of the County generously donated items to share and preserve La Porte County history.

In April 1978, La Porte County provided a two-story addition to the new La Porte County Security Complex to house the museum.  The move to this location was completed on September 17, 1978 and the museum was again open to the public.

In 2004, the demand for space by County Officials prompted a move of the Society’s Museum.  After considering several locations and also the possibility of the County building a building to house the historical society museum, Dr. Peter Kesling made an offer of the Door Prairie Auto Museum, a 10-year old building to the County.  His offer was accepted and he reinvested a majority of the purchase price in an addition to the museum adding sufficient space to house the Society’s collections, the W. A. Jones Weapons Collection which has been in the Society’s care since 1921, a number of Dr. Kesling’s cars to be on display and additional space for a meeting room, library and archives.  The Museum closed its doors in the Security Complex to the public at the close of business October 15, 2005, with a move anticipated into the new facility purchased by County government.  The Museum re-opened to the public in the former Door Prairie Auto Museum, 2405 Indiana Avenue, La Porte, in July 2006 with the Grand Opening held on Saturday, September 30, 2006.

This move has offered the Society many advantages—a meeting room for numerous special programs as well as the Society’s general meetings, outdoor area for events such as the Civil War Weekend and the Annual Old-Car Show as well as ample parking for visitors.  In 2011, the Indiana Historical Society recognized the La Porte County Historical Society, Inc. as the Outstanding Historical Society for that year having been nominated by Fern Eddy Schultz, La Porte County (IN) Historian.  The Museum was designated by the AAA Tour Book in 2011 and again in 2012 as a “Gem Attraction.”  La Porte County is extremely fortunate to have this outstanding facility to showcase the county’s history.  No other county in the state or possibly the country has such a local museum.  Besides the outstanding collection of La Porte County memorabilia, the Museum offers an exceptional research area which was dedicated in March 2017 as the Fern Eddy Schultz Research Library.

The La Porte County Historical Society’s goal remains the same today as at the time of its inception—to Collect and Preserve the Past History of La Porte County for the Future! 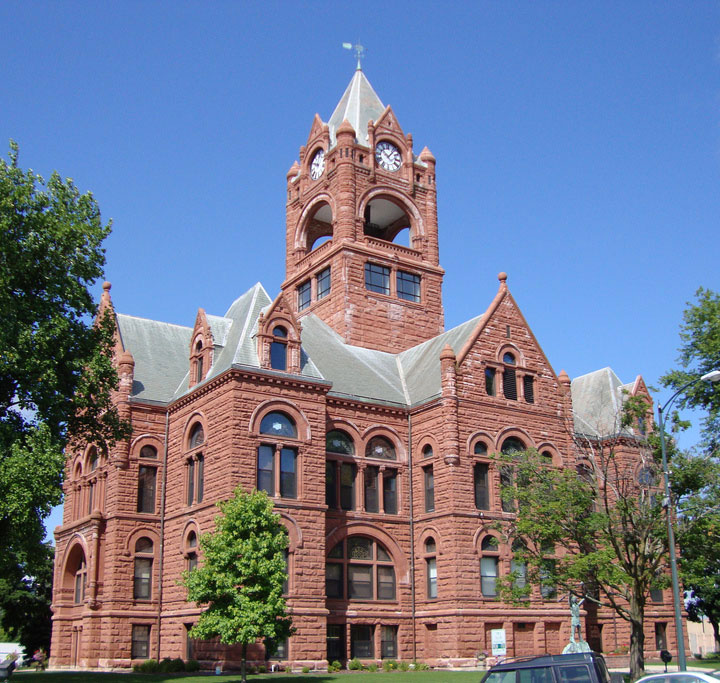 Before 1830, all of La Porte and Starke Counties were a part of the Pottawatomie Nation. All of the land from the Wabash River to Lake Michigan belonged to the Pottawatomie Indians. They were a peaceful people and had trails or traces that ran through the forests, marshes and around the lakes and along the rivers and creeks. In 1838, the Indians were removed by the United States Government to the Osage County of Kansas. Many of these Indians were old and could not stand the long trip and died on the way, so it has been called the March of Death.

The State of Indiana enacted that after April 1, 1830, all of Northwestern Indiana from the county of Elkhart to the state line on the west be designated as St. Joseph County and that five districts or townships be formed. Two districts to the west were called Highland and Michigan; two districts to the east were in what is now St. Joseph County; and the center district, later a part of the present La Porte County was named “Descheim,” meaning in French, “by the lakes.”

Then followed a move led by Aaron Stanton to make La Porte a separate county. As a result, La Porte, consisting then of 462 square miles, was incorporated and became an official county on May 28, 1832. The county was divided into three districts or townships designated as Kankakee, Scipio and New Durham.

In 1832, when La Porte County was formed, it only extended as far south as the southern line of present Clinton Township. The land to the south became a part of Starke County when it was organized but the people living in that area had difficulty getting across the Kankakee River to go to Knox (the county seat of Starke County) to pay their taxes, having to go east as far as Lemon’s Bridge. They asked to be annexed to La Porte County and this was done January 28, 1842. The area was first called Van Buren Township, named after President Martin Van Buren. Then, on January 10, 1850, twenty sections of land were taken from St. Joseph County on the east and added to La Porte County to give La Porte County its present boundaries.

Today, La Porte County has 21 townships. Kankakee Township first contained all of what now is Galena, Hudson, Wills, Pleasant, Union, Washington, Lincoln and Johnson Townships. Since the source of the Little Kankakee River was in Kankakee Township, this township was called Kankakee. The land along the river was full of springs which fed it. The first man to settle in what is now Kankakee Township was Philip Fail. In 1834, the Michigan Road was built across the northern part by the State of Indiana. Scipio Township first contained all of what is now Centre, Springfield and Noble Townships. The first settlers were Adam Keith and his wife Elizabeth and Lewis Shirley and his wife and mother. So far, the reason for the name is unknown. New Durham Township first contained all of what is now Michigan, Clinton and Coolspring townships. It was named by Miriam Benedict, the first white woman settler in La Porte County. She named it after her old home, Durham, New York. She was buried in Union Chapel Cemetery which was later rededicated and in her honor named Miriam Benedict Cemetery. The four remaining townships (Cass, Dewey, Hanna and Prairie) were formed from the area to the south, once Van Buren Township of Starke County.

There have been three courthouses in the City of La Porte including the present one and all have been built on the same location. Simon 0. Bunce was awarded the contract for the first building in 1833, at a price of $3,975. All walls were constructed of well-burnt brick which was made on the premises. Greek Revival style was chosen for the second structure designed by John M. Vanosdel and built by Luther Mann, Jr. with the cornerstone being laid in 1848, which still remains in the third building. Cost of this building was $9,350. The present courthouse is of Portage Entry (Lake Superior) red sandstone. The architect was Brentwood Tolan of Ft. Wayne and Charles A. Moses of Chicago was the contractor.

Total cost for the building was $328,000. All the stone was shipped via boat to Michigan City and transferred to La Porte by rail. There are a least 45 gargoyle-type faces located in the corners of the windows, as well as other areas. There are three floors and a basement, with the third floor housing the courtrooms. Stained glass windows are also part of the structure, especially the large one in the circuit courtroom of Iustia, Goddess of Justice. Officials moved into their new quarters in March 1894, exactly twenty-five months from the day of ground breaking. This is the oldest of the two existing courthouses in La Porte County. In 1970, the building was included in the Historic Buildings Survey.

From September 1 to November 19, a special exhibit of thirty-nine military uniforms and associated artifacts will be on display at the La Porte County Historical Society Museum!