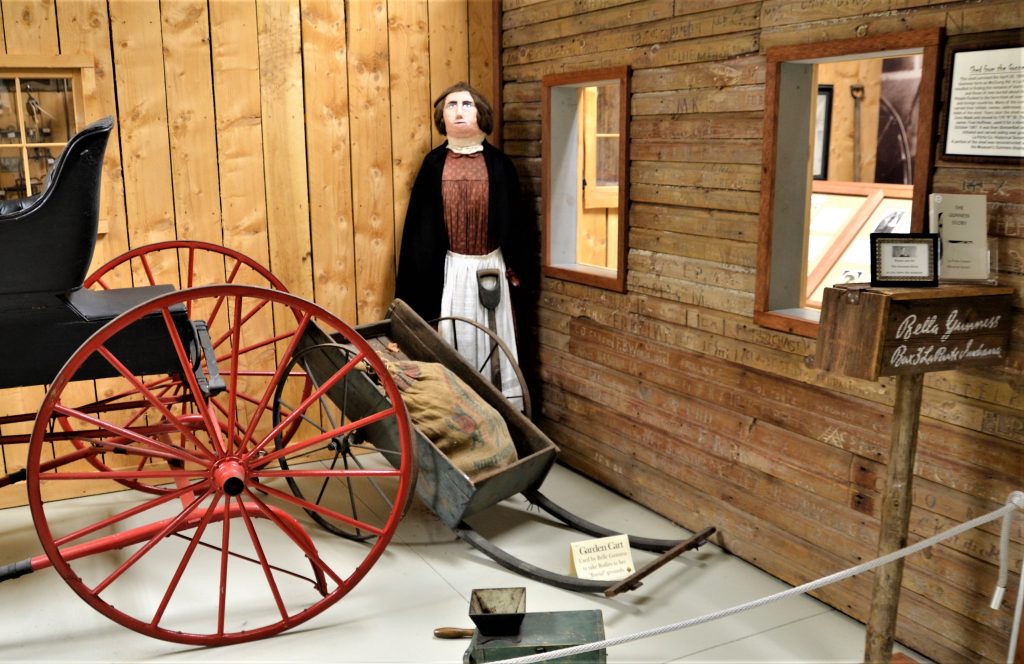 Belle Gunness was born Brynhild Paulsdatter Storseth in Selbu, Norway on November 11, 1859. Her family lived as tenants on a small farm owned by the Storseth family. In 1881, at the age of 21, Brynhild left Norway and settled in Chicago. She changed her name to Bella Petersen and worked for a time as a servant girl before getting married in 1884 to Mads Sorensen from Drammen, Norway.

The Sorensens had a home in Chicago which burned down. With the money they received from their fire insurance they purchased a confectionary store at the corner of Grand Avenue and Elizabeth Streets in Chicago. The business mysteriously caught on fire, and with the fire insurance they bought a new home in Austin, Illinois. It appears that they were not able to have any children of their own, so Mads and Belle took care of foster children. Two of these children died under Belle’s care. Caroline died in 1896 and Alex in 1898. They apparently died of “colitis” which could have been caused by poisoning.

Mads had a life insurance policy which Belle said was too small. He took out a larger one and mysteriously died on the one day the two policies overlapped. Because the neighbors were getting suspicious of these deaths, Belle took her 3 foster children and used the insurance money to buy a farm in La Porte, Indiana. Belle, Jennie, Myrtle, and Lucy moved to La Porte in November 1901.

In April 1902, Belle married Peter Gunness in La Porte. His wife had recently died and left him with two young daughters. The youngest died within a week after his marriage to Belle, and Peter died under suspicious circumstances 8 months later. Belle told the authorities that Peter was accidentally hit in the back of the head by a sausage grinder!

Soon after Peter’s death, Belle began submitting ads to 3 weekly Norwegian language newspapers throughout the Midwest. These ads were asking for a good and reliable man to become a partner in her farm. It is unknown how many men actually corresponded with her, but there were many men who could not resist the invitations and came to La Porte to visit Belle and her farm. One of the visitors was Andrew Helgelien, a Norwegian farmer from Aberdeen, South Dakota.

Belle had several hired men who helped with work on her McClung Road farm over the years. Ray Lamphere was hired in August 1907. Ray had hoped to marry Belle and become a partner in the farm. In January 1908, Andrew Helgelien came to La Porte to visit Belle for a couple of weeks. Ray became extremely jealous of Andrew. After 2 weeks with Belle, Andrew had money sent from his bank account in Aberdeen to the First National Bank in La Porte. Andrew and Belle went to cash the check, and although the bank and Andrew suggested she keep some of the money in the bank for safety, Belle took it all in cash. Andrew was gone the next day. When he did not return home to South Dakota, Andrew’s brother Asle Helgelien became concerned. After finding letters to Andrew from Belle, Asle wrote to Belle and the bank asking about Andrew. The bank confirmed he had been there, and Belle said he had left.

Meanwhile, Belle fired Ray Lamphere in February 1908 for trespassing on her farm and hired Joe Maxson as her new farm hand. Asle Helgelien was still writing to Belle and inquiring about his brother, while Belle decided to go to her attorney to make out her will. The next morning in April 28, 1908 at 4:00 A.M., Joe Maxson woke up to the smell of smoke and tried to wake Belle and the family because the house was on fire! Without success, he hurried to La Porte and got the fire department to come put out the fire. That afternoon, the bodies of the family were found in the ruins of the basement. Mysteriously, the bodies of the 3 children were discovered next to a woman’s body that was missing a head!

Asle Helgelien came from South Dakota to La Porte hoping to learn something about his missing brother, Andrew. After not finding any clues in the ruins of the fire, Joe Maxson and Asle began digging on the farm in an area where Joe and Belle had buried garbage in March. They discovered the body of Andrew in a gunnysack. La Porte County Sheriff Albert Smutzer and a crew continued to dig for several days and discovered at least 13 bodies that had been buried on Belle’s farm. Thousands of people from throughout the country had come to watch the digging for bodies on the Gunness farm. Because of his troubled past with Belle, Ray Lamphere was arrested for arson and murder. He was put on trial in November 1908 at the La Porte County Courthouse and found guilty of arson but not of murder. Without a head, no one could prove that the woman’s body found in the fire was Belle’s. After 100 years, there are still many unanswered questions to the mystery of Belle Gunness!