There are 14 “period room” displays that depict different times in history. Guests of the museum step back in time and visit an authentic pioneer log cabin, a Victorian parlor and bedroom, a 1920’s kitchen and living room and a mid-century living room. Additionally, individuals can view a general store, doctor’s office, one-room schoolhouse, music room, old-fashioned business office and dentist office that round out the displays. 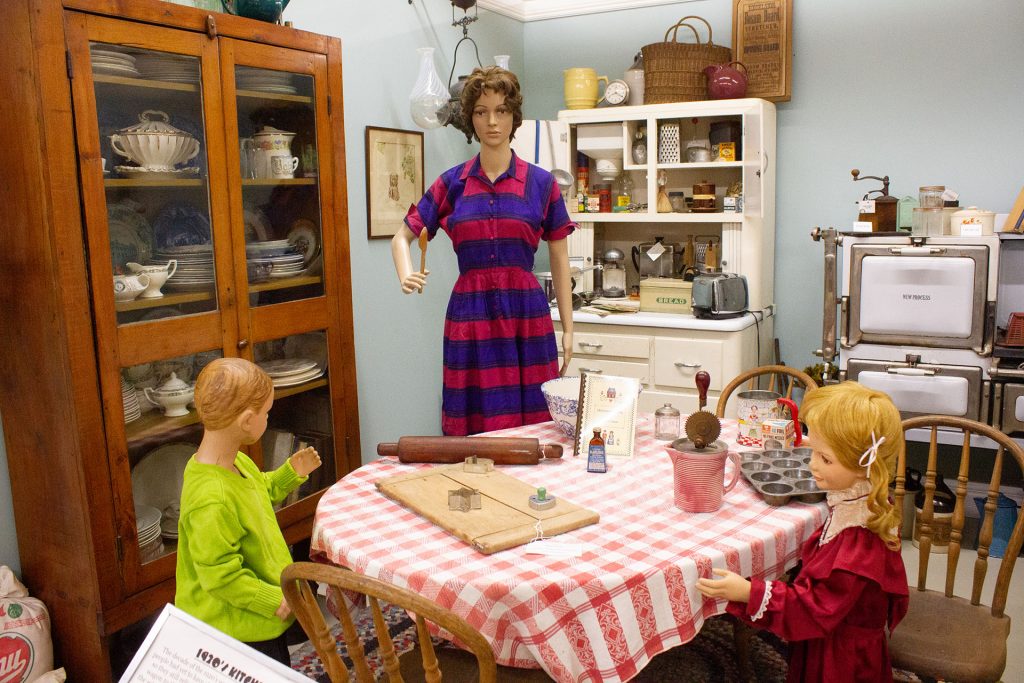 The 1920’s Kitchen contains several examples of changing technology. The availability of natural gas and electricity to homes brought about these changes, but they occurred in different decades depending on the location. Most city dwellers would have had electricity by the 1920’s, but rural farm homes would still be using kerosene lamps for light, a wood stove for cooking or perhaps a kerosene stove like the one on the right hand wall here in the display. On the back wall is a gas stove that would have been in a house in the city. On the far left-hand wall is a wood icebox. The upper door concealed a block of ice almost the size of the door. Food was kept below, and water from the melting ice collected in a tray at the bottom.

The ice industry was big in La Porte with our many lakes. When the ice was thick on top, it was cut out by horse-drawn saws that looked like plows. It was stored in ice houses, covered with straw to keep it from melting. It lasted clear through the following summer and fa11 until the next ice harvest. Blocks of ice were brought to homes by wagon.To the right of the wood icebox is one of the first electric refrigerators. It worked just like our modern refrigerators, though its compressor was on top. 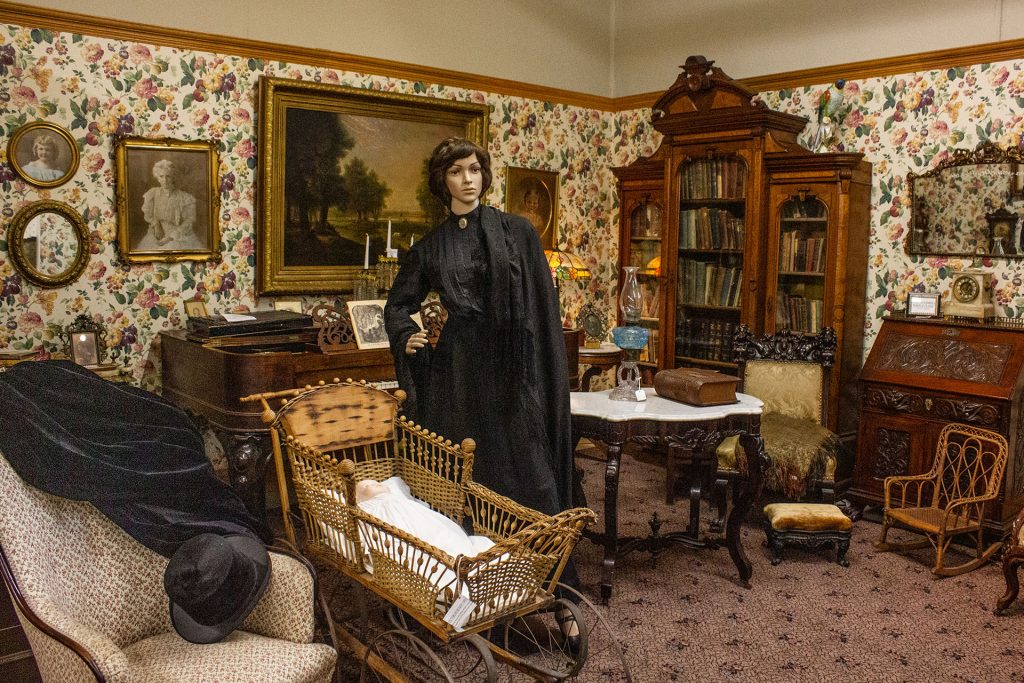 The word “Victorian” refers roughly to the period of time between 1850 and 1900, when Queen Victoria reigned over the British Empire. Because of its many colonies, English rule extended around the globe, giving rise to the saying that the sun never sat on the British Empire. The furnishings in this room date from that period, and reflect the ornate style popular then. The outside of the house would be just as ornamented and complicated as the interior. Large covered porches with fancy trim, spindles and brackets, tall windows with stained glass: all these were desirable features on a Victorian house.

The word “Parlor” comes from the French word “parler”, which means to speak. This parlor would be a nice place to sit and talk. Reading was another possibility, and the tall bookcase in the corner is filled with books written by La Porte County authors. Also prominent in this room is the bronze statue holding a clock over her head, made in France around 1865.

A tall table in the middle of the room was typical of Victorian parlors because it helped the kerosene lamp to shed its light over a wider area.

This mahogany slant-front desk captures the Victorian style at its peak. Notice the drawer handles carved as monster heads, the elaborately decorated sides and the brass mounts and rail around the top. Inside, carved pigeonholes conceal a secret compartment for valuables. 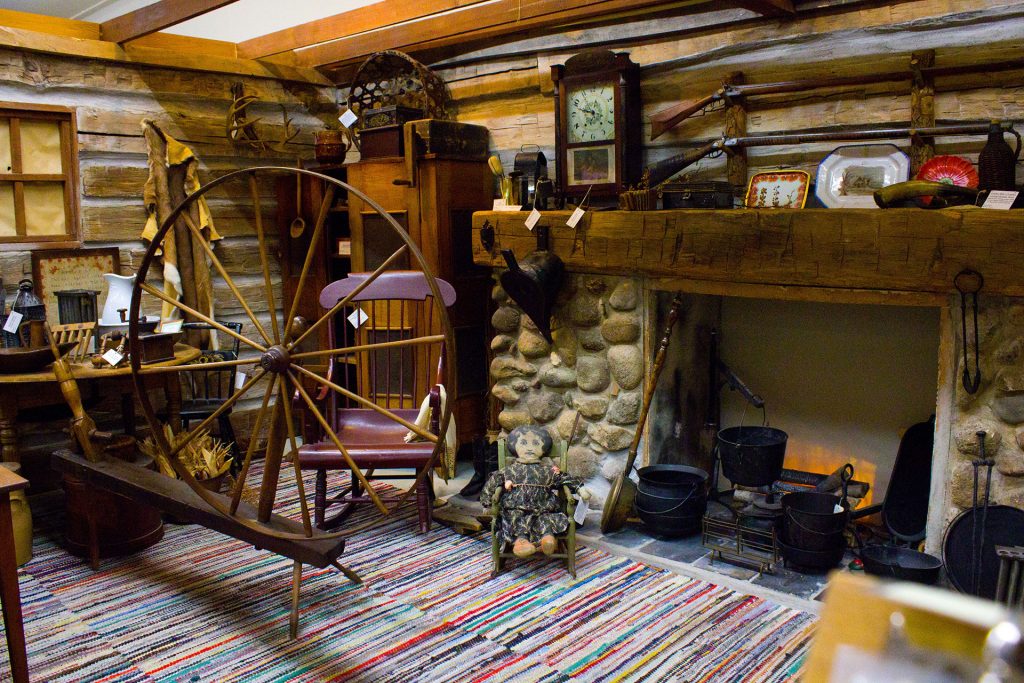 This museum display depicts living conditions for the first settlers of La Porte County. Furniture and household items actually brought to La Porte County by the pioneers of the 1830’s are on view. The mahogany Empire style dresser belonged to Miriam Benedict, who is recognized as the first European resident in the county. Having initially settled in Illinois with her family, Miriam came to La Porte County in 1829 after her husband died. Her picture is over the bed in the display. A fireplace reminds us of the essential nature of fire. The fireplace heated the cabin, cooked the food, and provided light. A variety of iron cooking utensils are here for your inspection. A butter churn, spinning wheel, candle, mold, and other tools used to produce the things needed for daily existence are on display. 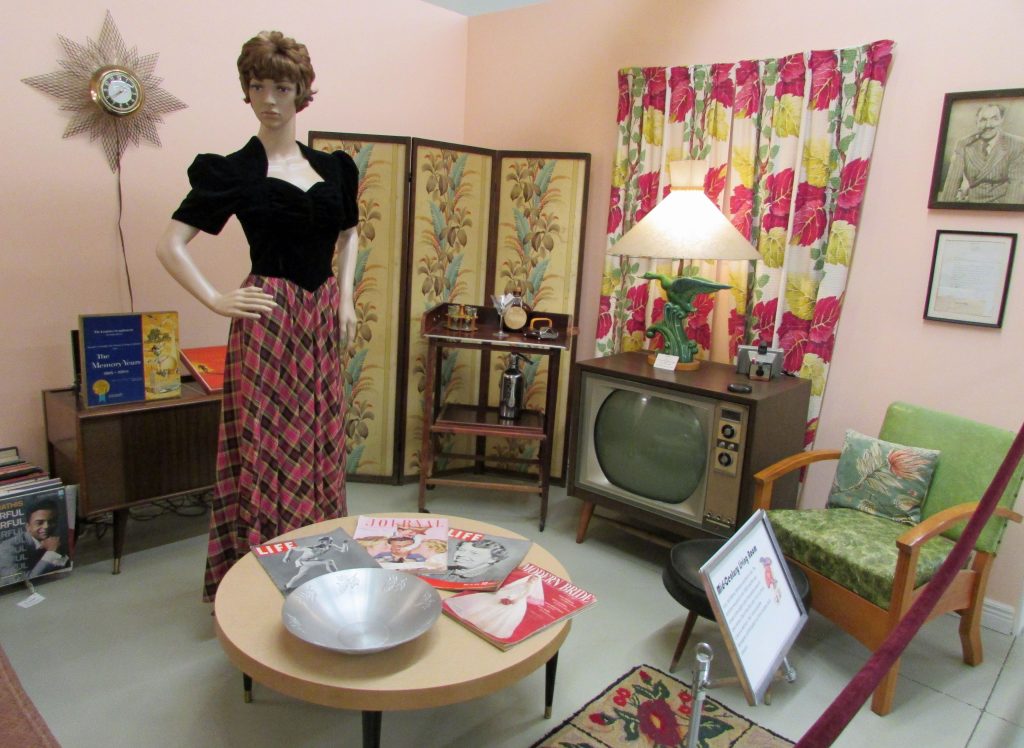 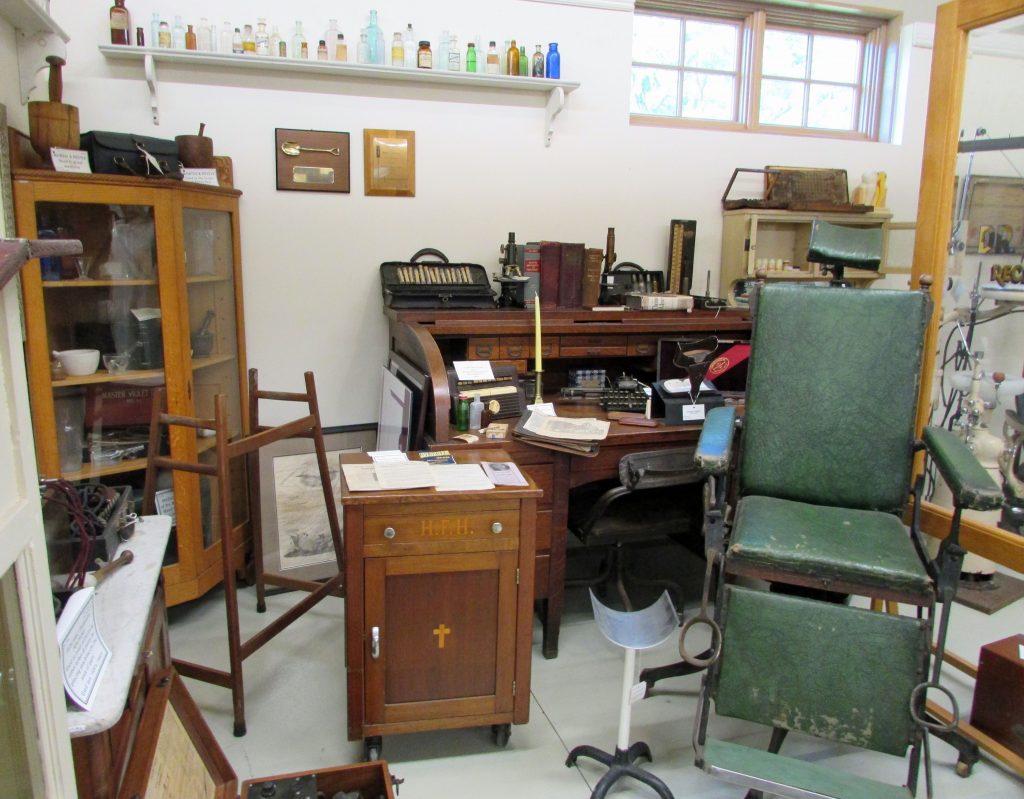 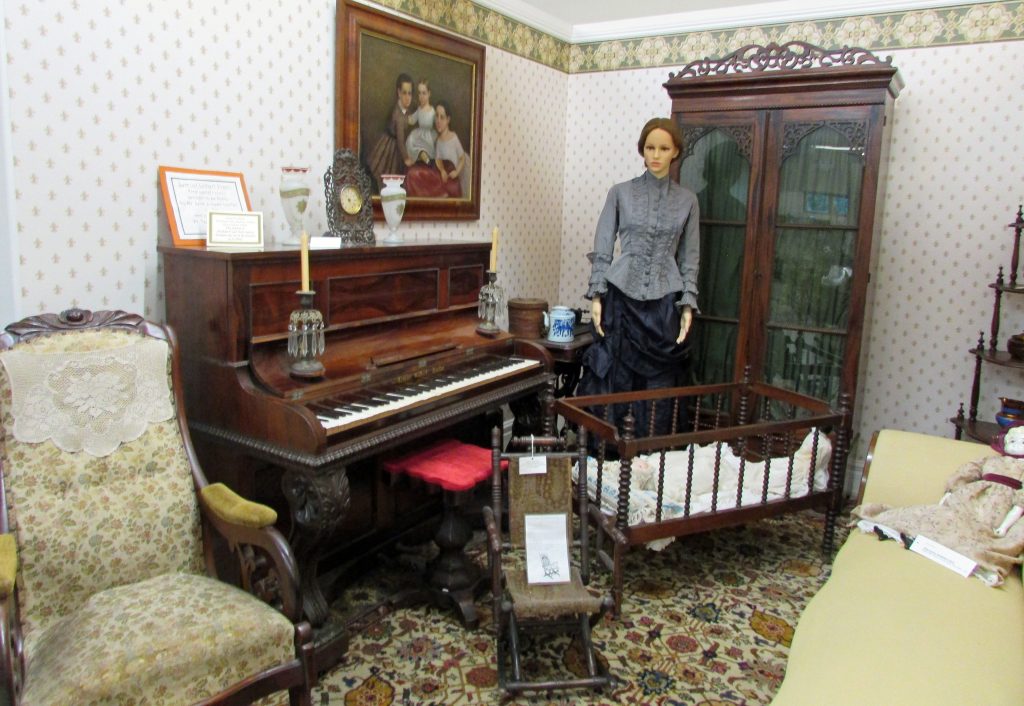 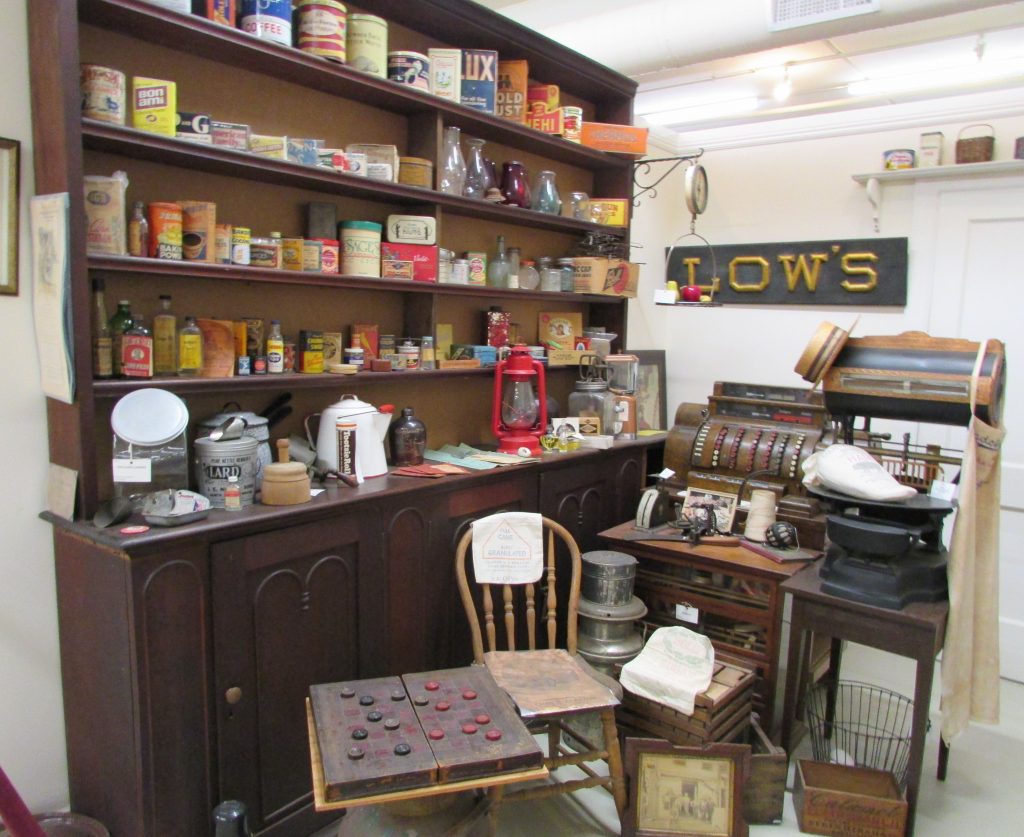 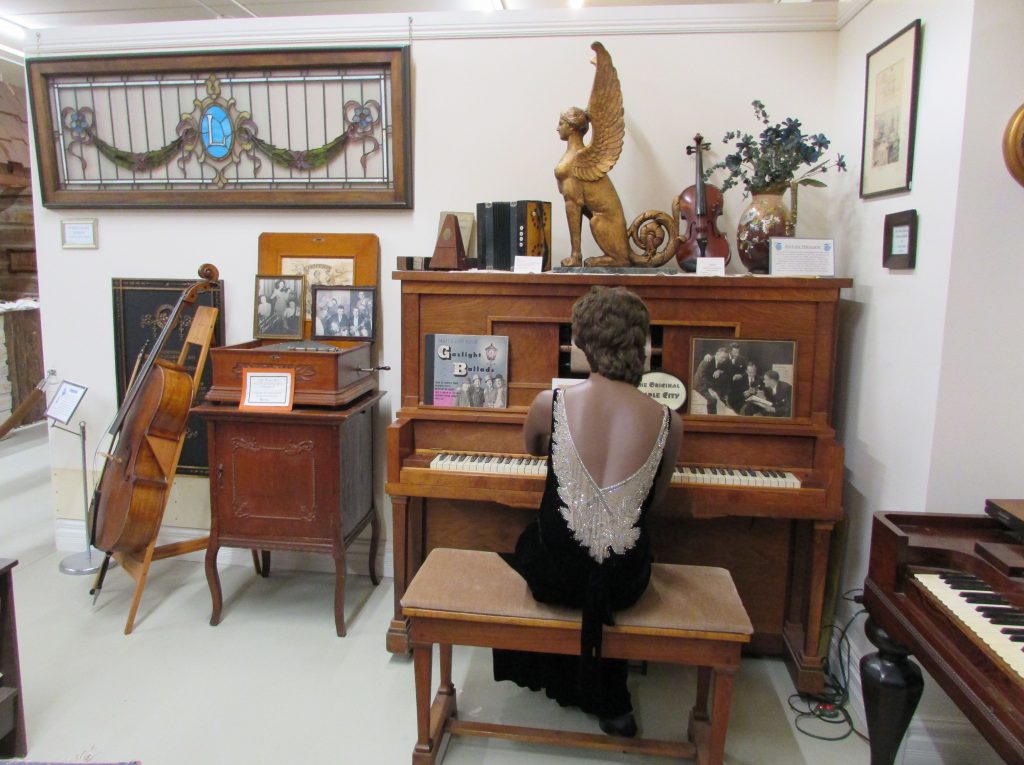 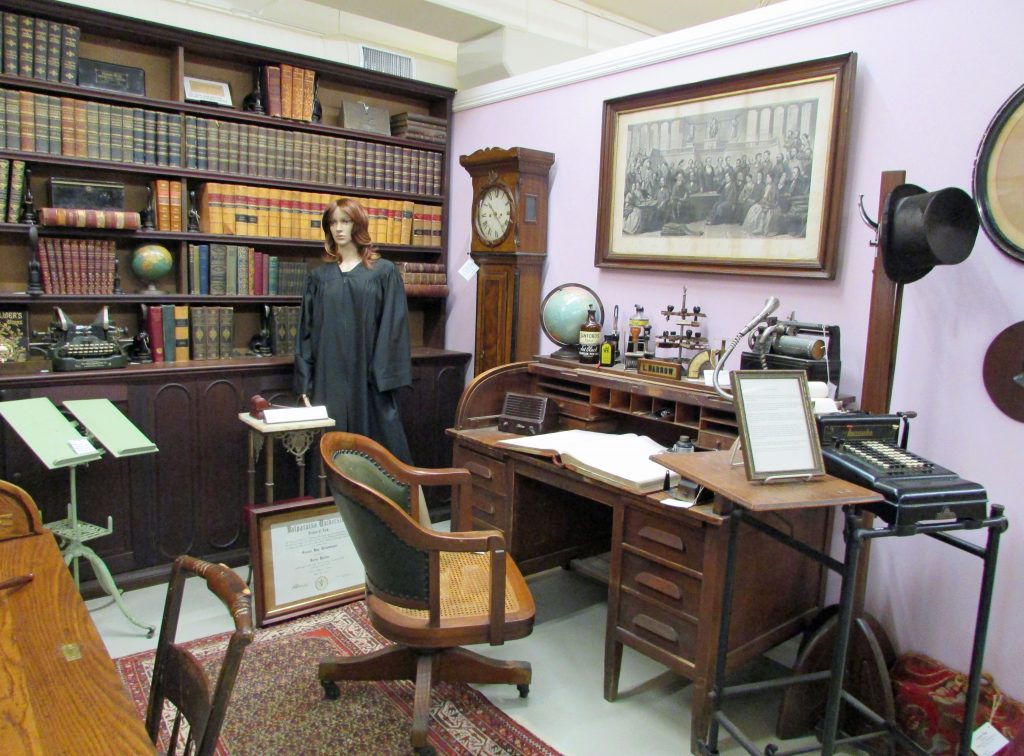